You are beautiful (Tell yourself that) 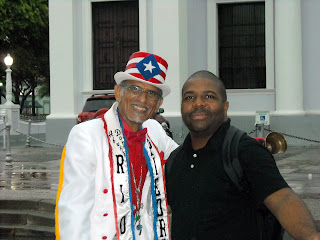 A few days ago I returned from a trip to Puerto Rico with the Wifey. We visited Old San Juan, San Juan (proper), Loiza, Santurce, Ponce, and we had a ball. While in P.R. I promoted the Spanish version my line dance single 'La Cinturita'. Upon returning to Hampton Roads Virginia I met with some Special Event business owners developing a wedding event that we are holding. All of these business owners were women, all were African-Americans. One stated "Oh wow, I know you were staring at those Puerto-Rican women with your crazy self. Those Puerto Rican women are so pretty." I stated "Yea, I saw some gorgeous women....but I see fine women every day so I don't trip over that." She retorted "But they are so much more beautiful than we are...Aren't they ?.....Seko, women know women...them women are so pretty." I kinda' looked at her 'funny-like' and said "Sisters are fine, Spanish speaking and English speaking.. Sisters are damn fine." She said "You trying to be funny, you know that they women are prettier than normal 'Black' women......Right?..." The other women remained silent awaiting my answer.

Every morning I have my children say a 'mirror-mantra' which includes a statement about them being attractive. I have a particular concern for my daughter . As I noted on another blog I worry about her self worth. My daughter's hair is very thick, I tell her how regal and beautiful her "African" natured hair is. I learned this reading about Felipe Luciano, the New York born Puerto Rican of the Last Poets, who said in an article how his mother would constantly tell him how beautiful his "African" hair was. I loved the Last Poets growing up and Felipe had a poem that used to empower me named "Jibaro...My Pretty Nig##r". He says in the poem, "How times have changed men, how men have changed times." After studying the African presence in Puerto Rico about 11 years ago I found an article about Elder Felipe in Ebony magazine who discussed how some, I stress some, Latinos in New York looked down on people of African descent and how while on the bus his mother kept her mouth shut while she heard other Latina mothers say some very downing things about Blacks, then his mother would speak to Felipe and his brothers in Spanish to the amazement of the bus riders. The part of the article that has forever touched me was his description of how his mother constantly reminded him of the beauty of his tightly curled hair.

Brothers we have got to begin/continue/consider the way we deal with our women. Too many think that their features are of a lower caste. As I studied our African diaspora I have seen factors that are affected people of African connection that have either been colonized or enslaved. A "Perm" is seen as a necessity for beauty rather than an beauty style/enhancement, Bleaching/fading cremes were at one time very popular for darker women, "Blacks" live in areas that are not maintained very well, and these "Black" women find women that may be racially different from them as being more beautiful than they. I also find that in these studies and in my travels I realized that too many women of African descent suffer from self esteem and worth issues. In discussion with friends some have noted that these issues are prevalent with all women. However, I don't see that "White" women think that as a whole "Black" or "Mixed" women are in general more attractive than they are. I do see that paradigm as being solidly a "Black-Thing".

Now.... A truly funny aspect of "me-being-me" is that this revelation-of-sorts is occurring during a time in my life that I'm starting to find more "White" women as attractive. For a time in my life I didn't find a lot of "White" women's features as frequently as attractive as "Sisterly" or "Soulful" features. I was D.J.ing a wedding reception this weekend and thought too myself "Whoa, she's fine" as I watched a group of "White" women dance and say every word to "Baby Got Back" by Sir-Mix-A-Lot. I've always found it interesting that this song placing Sisterly features above "White" features seems to be a favorite and highly requested whenever I perform for a mainly "White" crowd.

I'm starting to believe that a person is who they consider themselves to be, and that the consideration is partly made up of how the world interacts with that person. While I was a school teacher (3 years) and a school counselor (11 years) for Portsmouth Public Schools I developed a habit of referring to the female students who didn't fit the 'mode' of being beautiful as "Pretty Girl." As I stated this the students who were nearby the student would say "You think she's pretty ?" I would always say "Yes" and then smile and say "I hope my daughter is pretty too when I have children." The child that I was referring too would often be as surprised as the other kids. I also would make a point to state that a child's mother or female guardian was beautiful when bringing up their parent, even after being cursed out by some of these female guardians. I developed the belief that if one knows better, they do better. If one feels better, they act better. If one understands more, they achieve more. I used to say "Know better, do better. Feel better, act better. Know more, do more." These students seemed to perform better when they felt good about themselves. The less inferior they felt, the less inferior they did.

During December of 2007 I put thoughts to paper and wrote the words "Black Improvement." I have been haunted by those words almost daily and am now driven to act on it to stop it from acting on me. One simple strategy I think will affect a change in people of African descent is to uplift our women, then uplift all women. Start with the women around you and uplift them. Tell them when they are right, compliment them, and encourage them. Tell them that they are beautiful.

She said "You trying to be funny, you know that they women are prettier than normal "Black" women......Right ?" I told her that she was beautiful, and we carried on with our meeting. She smiled the remainder of the meeting. She later told me, I wish I could see myself the way you see me. I thought to myself....."We need improvement."

Brothers, I direct you to encourage and uplift as many women as you can. This is the Black Improvement Movement signing on.

Seko VArner
The Imani Foundation
Posted by Our Black Improvement at 12:20 PM

Is it true what they say about Black People? Click here to download the pdf. formatted book of the same title authored by Kofi Williams. This book is written for African-American teens.

Hidden Beach's Yes We Can Project